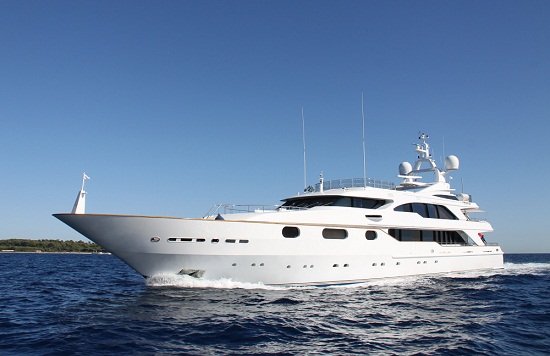 It’s has only been just over a month ago that we had announced SuperYachtsLondon as a new brokerage firm, and today Jimmy Broddesson reports the sale of the first superyacht for the company, the 50 metre superyacht Taiba.

The superyacht Taiba is being delivered to her new owners right now and following the sale Jimmy commented, “I am extremely pleased with the sale of motor yacht Taiba, a yacht which I know very well, but this is only the start for SuperYachtsLondon as we have several more deals closing in the next few days/weeks, including an exciting 40m+ new-build project with a well-known Northern European shipyard.”

Taiba takes an important place in the history of her builder Benetti, who are celebrating their 140 anniversary this year, as she was the first superyacht in the shipyard’s highly successful Golden Bay series.

One of the reasons her new owner decided to buy Taiba was that she was in great condition following a refit last Summer at the Palumbo Shipyard in Naples, Italy. One of the biggest changes to the yacht was a completely new interior to a design of Laura Pomponi of Luxury Projects. During the refit, most of the furniture in the saloons and dining areas have been replaced as well as the deck furniture. Other notable changes include a new entertainment system, new led light spots throughout the yacht, and a repaint of most of the exterior, amongst other repairs, changes and updates.

With a master stateroom on the main deck, and two doubles and two twins with Pullmans on the lower deck, Taiba can welcome onboard up to 12 guests with a crew of 11.

Superyacht Taiba had an asking price of € 9,500,000 and she was centrally listed by Stuart Larsen of Fraser Yachts.